Many rules of grammar, usage, and punctuation make sense. But others are questionable, such as not starting a sentence with “but.” 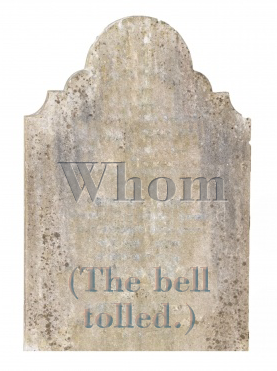 Why are grammar rules often stupid? They were the artificial creation of purists (many in the 19th C.) who admired Latin grammar so much, they tried to shoehorn English into it.

The effort was and is a continuing clusterfail. The language (as it actually evolves) thumbs its metaphorical nose at the dumbest of those conjunction function injunctions. We end sentences with prepositions, we split infinitives, we abandon the “proper” use of that endangered species of a word, whom.

To carelessly break those rules is something we ain’t putting up with. So to speak.

We advise our staff writers, by the way, to avoid making grammar “mistakes,” even the ones we just called stupid. W, as they say, TF?

You should in your writing, we believe, steer clear of all grammatical sins, venial or mortal, sensible or ridiculous – because language screwups and booboos cause a percentage of your audience to stop thinking about what you’re saying, distracted by how you’re saying it.

What percentage will be distracted? A split infinitive might annoy 1%. Confusing “less” with “fewer” maybe 10%. Confusing i.e. with e.g., 20%. The “shoot me now” errors will, however, bring sneers from 50%. Why, we have to ask, should you roll the dice when you don’t need to? Why risk losing the focus of even one reader, when she might be the one who would otherwise buy from you, hire you, vote for you?

If you are careless, you signal that you care less. No bueno.

Inquire about our services

Where to find us: